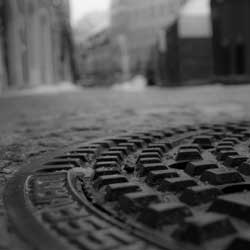 The EN 124-1 standard, in its 2015 version, introduced a new concept for road safety: the Pull Out test. The test would avoid the "suck" effect of the manhole covers on high traffic roads, creating problems for pedestrian safety and for the vehicles themselves. The test, in fact, verifies the endurance of the binding system that the manufacturer has decided to use to anchor the cover to the frame avoiding the detachment. This result, which has to be verified by a specific test, can be obtained through:
a) securing features
b) a proper weight of the cover
c) other methods (i.e. specific product interlocking geometries)

However, there was a doubt regarding point b), which foresees as acceptable, surface mass values from 200 kg/sqm to 300 kg/sqm but also accepts other mass values, without specifying whether lower and/or above the quoted range. This aspect was finally clarified by the Work Group of CEN WG4 during its meeting in April 2018.

To conclude, at present, these " manhole covers” are to be considered compliant with the EN 124: 2015 standard. Products which, despite having a surface mass of less than 200 kg/sqm, don’t have a binding system, therefore are only subject to their own weight, are included.